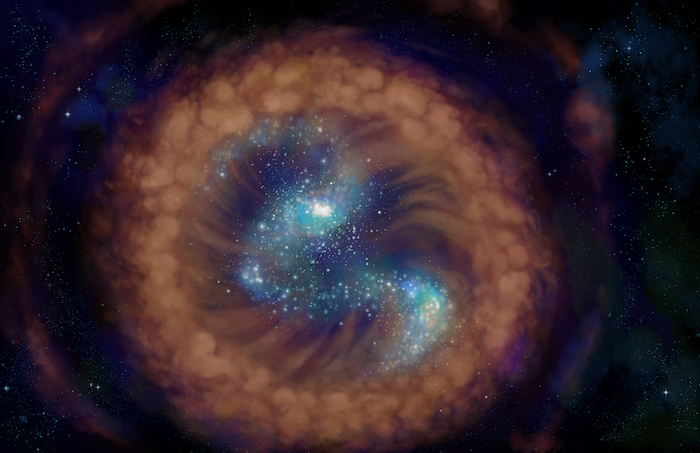 My degree is in science and sometimes do science illustration. Here I illustrated galaxy CQ 4479 for the University of Kansas press release. It was published just in the for Black Hole Week! I always love doing galaxy pictures, it really lets me play with the lighting and think through problem-solving. Here we are looking down the jets of the galaxy and at the expelled gases. This galaxy is an interacting galaxy similar to the Antennae galaxies, you can see a fainter nucleus at the bottom. This is the result of two galaxies colliding.

This galaxy offers us a rare glimpse at the brief period while cold gases that drive star formation are being expelled by heavy winds but still present.

If you are interested in behind-the-scenes such as thumbnails and progress shots you can see some of the progress shots of this science illustration along with other pieces by becoming a patron on my patreon ^.^

You can also see my previous illustration of a cold quasar here!

You can also see this phenomenon covered in the media!
https://scitechdaily.com/cold-quasar-forming-new-stars-in-spite-of-active-galactic-nucleus-puzzles-astronomers/