Just got back from Tiny Paws Expo, was a blast!  I always love seeing my friends in the furry community, the conventions never fail to impress me for their friendliness and good vibes.  Selling was a bit slow, but I didn’t lose my shirt. I also gained some new players on my gryphs game.  My husband Atraties will likely be head of security next year. Below was my very similar set-up for FurXoticon 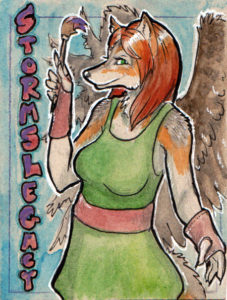 Being a first time convention but run by seasoned folks it was small but ran well.  I look forward to how they evolve in the future, I predict it will be a big-time convention soon if its precursor FurFright was any indication.  It’s unique for including a lunch break for dealers!  A lot of the dealers did not do so well.  I would recommend holding off a few years before applying if you are not a local.  We are only a 3 hour drive so it wasn’t a big deal for us, I plan to go back next year. The hotel wasn’t crazy at $119.00 a night.  It was fairly nice and could easily be split 4 ways.

The people at furry conventions are generally a good crowd, and Tiny Paws takes that congeniality to a whole new level.  It’s run by the same folks as FurFright which was my all-time favorite convention.  it was my first and the reason I got into the scene in the first place.  Everyone is so kind, helpful, friendly…I wish more conventions were quite this aimed at the personal touch.

Because I wasn’t inundated I got to sit in the zoo/social area and do art trades which is something I used to enjoy before getting swept up in the world of paid art.  It was quite a fun time!  Free snacks from friendly neighbors and good conversation.  Plus, furry conventions are super family friendly so there were well-attended kids about as well.  It’s really funny given the reputation furs have socially. 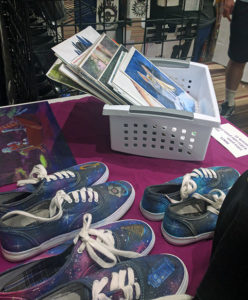 Looking over my set up, I still h

ave a little ways to go before its perfect.  Recently I made the shift from hanging prints on a frame made with storage cubes to using a 2X4 FT gridwall panel to give people an idea and the rest in a flipper.  I’ve downgraded even further to just a basket for the prints which now are bagged with backings, and it looks much nicer. I need a showier basket but this one worked in a pinch when the flipper wouldn’t do.  Always need to be flexible!

I’m trying to streamline the whole she-bang so that I can travel light and set-up in minutes.  One thing I cannot compromise for space though is my lovely postcard rack.  I purchased it from Displays-2-go, have been very happy.  The first one they sent me was missing the sign holder and when I contacted them they shipped me an entire second rack to make up for it.  Great customer service!  I’ve been using it for a couple conventions now, plus in a local consignment shop and been very happy with how it looks and behaves.  The one issue is how much space it takes in the car.  Eventually I’d love to use both at a show but don’t know how to fit them in my little Honda Fit!

I plan to do a post in the future on ways to save money doing conventions, I’ve learned a bit over the years!